Should You Share Your Salary and/or Benefits Info with Your Co-Workers? 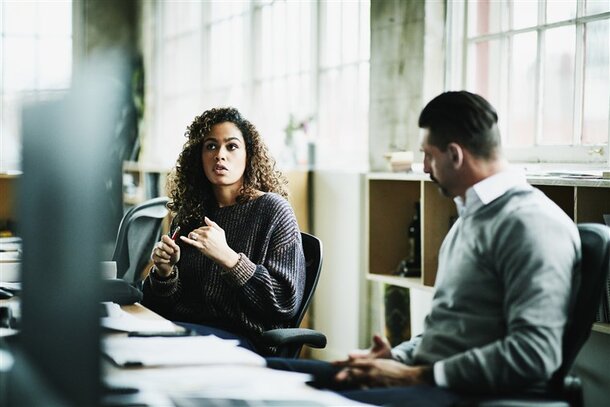 As a professional speaker, I have the opportunity to visit with audience members in every major city throughout the US and Canada—and a lot of smaller towns, as well. I keep track of the questions I’m most frequently asked, and this one’s definitely on the “top ten” list. So let’s dive right in and discuss the pros and cons.

First of all, it’s literally illegal for an organization (public sector ones, at least) to forbid you from discussing your salary with your co-workers. And it’s been this way for quite some time, thanks to the NLRB, which was passed into law way back in the mid-1930s. So, in theory, you won’t get into trouble if you decide to talk money with your colleagues. However, note the key phrase here: in theory. Reality’s another story. No matter whether or not it’s legal, I can assure you that most organizations, unless they already subscribe to open and transparent salary policies (check out SumAll and Whole Foods, to name just two), would prefer that you not chat up your cubicle mates about your respective paychecks.

Why? Because talking money with co-workers can create all sorts of problems.

Some of these problems actually stem from the company’s failings: conversations about take-home pay among employees may expose the organization’s unequal salary practices. And disparate pay scales almost invariably reveal an age-old practice that’s still alive and well today, despite what we may think: women and minorities are the ones at the bottom of the salary scales, while white males remain on top. (This reality, by the way, becomes one of the most compelling reasons why sharing salaries among co-workers is a good idea.)

And then, there are the problems that can arise simply from good old-fashioned human nature. Jealousy and resentment are very strong emotions. You and I head off for a drink after work, and after a while, the conversation advances toward the old “you show me yours and I’ll show you mine” dance. And what happens? Either I’m making more money than you, or you’re making more money than me. It’s almost impossible for there to be a win/win when you broach this subject with a co-worker. One of us goes away feeling bad (or being downright angry) about the deal we’re getting back at work—even if we were perfectly happy an hour earlier.

To further muddy the waters, there are countless examples of employees being “punished” for discussing salary specifics. As you can imagine, employers’ reactions can range from indirect and subtle responses (such as frowns and snubs) to full-on chides and official reprimands. And yes, I’ve already mentioned that such a response would be illegal, but that hasn’t stopped a lot of companies from trying to stifle salary sharing via bullying methods. (Trust me, I’ve seen it, firsthand.)

So, if most companies don’t like the practice, and if we humans often end up wishing we hadn’t gone down that road, are there some reasons why it’s still a good idea to discuss our salaries with others?

I’ve already mentioned the strong possibility of pay-scale inequality exposure, which can definitely lead to important progress toward gender and racial equality in the workplace.

Another reason is that by better understanding the pay scales of the organization you’re working for, you’re in a more informed position when it comes to negotiating a raise or asking for a new job classification. Knowledge is power, in this case.

Still another reason is more long-term: imagine a world where salary discussions are no longer among the list of conversational taboos, along with sex, religion, and politics. (When you think about it, why in the world would money-talk fall into the same category?) As soon as you demystify and naturalize a topic, it loses its forbidden quality.

So how do you start a conversation about salary with a co-worker?

For starters, it’s very important to ask yourself about your motivation. If you have a compelling reason—you have very strong suspicions that you may be underpaid at the company you’re working for, or you’re trying to figure out what salary to ask for in an upcoming job interview—then go for it. But if it’s simply out of idle curiosity, don’t risk it. There are far too many downsides to such an investigation, so you want to make sure you can identify some solid upsides before you proceed ahead.

Next, do a little research on your own before you approach a co-worker for a paycheck chat. It’s very possible that you can find what you’re looking for simply by looking on the company’s website for information about job classifications and/or pay scales, or by asking generalized questions of the HR department. If you can gather the information you’re seeking without entering into a salary-divulging meet-up, it’s always a safer bet.

If you decide to approach a co-worker, make sure you’ve thoroughly vetted them ahead of time. Do you trust that your conversation will remain confidential? It’s preferable that you know your confidant fairly well, and better still if you’re actual buds. You don’t want to run the risk of this person telling the whole world what your salary is (unless you really don’t care), or worse still, that you’re snooping around trying to figure out what other people make.

This next one’s a little tougher to orchestrate, but it’s worth a try, depending on where you work. Here’s a fact: there’s always safety in numbers. In other words, if you can possibly manage to get your entire department to divulge their salaries, it’s less likely that any one single person will incur the wrath of management, should they find out that wages are being discussed among employees. (Remember, despite it being illegal to prevent employees from discussing salary information, it’s still not appreciated by most companies.) This “group share” method is also a much more effective way of exposing company-wide pay inequities based on gender and race.

Finally, be prepared to be summarily rejected. No matter how gentle you are in your approach, and no matter how carefully you’ve chosen your “inquiree,” you might be met with a “Heck no, I don’t want to talk about my salary!” Despite all the upsides, most people remain uncomfortable participating in this kind of intimate divulgence. If this happens, thank the person for his/her honesty, and back away from the subject.

So there you have it. Whether or not you decide to discuss your salary with a  co-worker depends so much upon where you work, what position you’re in, what your discussion goals are, and upon whom you decide to ask. Just like with most things in life, using your good judgement is paramount.

Denise M. Dudley is a professional trainer and keynote speaker, author, business consultant, and founder and former CEO of SkillPath Seminars, the largest public training company in the world, which provides 18,000 seminars per year, and has trained over 12 million people in the US, Canada, South Africa, Australia, New Zealand and the UK. Denise holds a Ph.D. in behavioral psychology, a hospital administrator’s license, a preceptor for administrators-in-training license, and is licensed to provide training to medical professionals in the United States and Canada. She’s also a certified AIDS educator, a licensed field therapist for individuals with agoraphobia, a regularly featured speaker on the campuses of many universities across the US, and the author of Simon and Schuster’s best-selling audio series, “Making Relationships Last.” Denise speaks all over the world on a variety of topics, including management and supervision skills, leadership, assertiveness, communication, personal relationships, interviewing skills, and career readiness. Denise’s latest book, “Work it! Get in, Get noticed, Get promoted,” is currently available on Amazon.com, and is receiving all 5-star customer reviews.