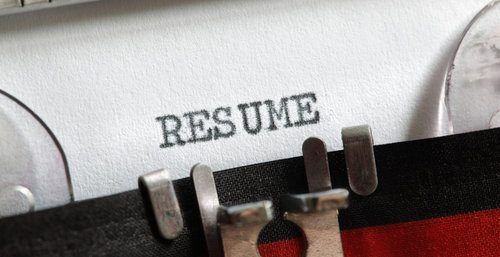 A resume is needed over the job application is because it is a presentation of who you are. In short, it is an advertisement. You are the product.

It includes achievements instead of just "duties" and provides a lot more room for your information compared to the small section found on a job application form.

A job application includes information that would not be appropriate to list on a resume such as references, reasons for leaving a job, salary information and mailing addresses for each employer, to name a few.

Resumes have been in existence for several decades, probably right after WWII, and were certainly a lot less complicated than they are these days. They were not as much of a critical part of the job search process as they are now.

Many jobs, such as blue-collar trades, nurses, and hairstylists required a brief conversation with a supervisor or to complete a job application at the business location in response to a simple job ad or a walk-in-off-the-street effort to explore job opportunities.

The fact that people went directly to the company to complete the application meant minimal competition unless the country was going through a recession and the lines for even the lowest paying jobs wrapped around the block.

The 1980's changed all of that. Companies felt the financial pressures of the economy and emerging competition, both in the U.S. and globally reaching. To survive, major companies merged with other companies or were acquired in leveraged buy-outs.

When two companies merge it creates duplicate positions down the line. It usually takes about a year for the newly formed company or acquiring company to figure out who is staying and who is going.

When the dust settles, there ends up being a rise in unemployment and fewer job openings. Since the reason companies underwent a merger or acquisition is financial, restructuring their company and its workforce was necessary and keep costs down.

To achieve that goal, companies began hiring candidates who were well rounded and could perform more than one job function. That way the company could increase productivity and reduce payroll expenses. The proverbial dedicated employee who stayed in the same job for thirty years and retired with a gold watch became a thing of the past and more of a risk to companies looking for candidates who could multitask.

This put a lot of pressure on job seekers to develop resume formats that highlighted how well rounded they were. The chronological resumes weren't really working well to achieve that goal, so the functional resume was designed to showcase a job seeker's functional skills rather than their chronology.

The functional format seemed like a great idea at first, but hiring companies disliked it because it allowed job seekers to hide gaps in employment and it made it difficult to understand a job seeker's career path.

During the 1980's, the World Wide Web as we know it today began to take hold and exploded by the 1990's making it very easy for job seekers and hiring companies to communicate. This meant exponentially more job seekers applying to job ads online than ever before. No longer could companies pick up the phone or read an email to qualify a potential candidate.

Companies do not have the resources to read a general letter or email covering the basics of a job seeker's employment history. They need to see a resume because a resume, although creatively written and designed, is still a technical presentation of a candidate's background, breaking it down into universally recognized sections that we all have grown to know and expect.

These all-familiar categories include Objective (or Title Statement/ Heading), Summary of Qualifications (or Profile), Professional Experience (or Work History), Education and Computer Skills. Other categories include Community Involvement, Military Background, Internship Experience, etc., depending on the job seeker's unique background.

This makes it a lot easier for companies to scan through hard copies of resumes coming in over the fax or in the mail. In fact, so many resumes are sent to companies on a daily basis in response to job ads (print and online) or exploring opportunities that companies have implemented the use of resume scanning technology. The software uses Optical Character Recognition to convert hard copy to text and stores it in a database. Then when the company has a vacancy, they go to their resume database and search for possible candidates.

Embrace the resume. It is an effective way for you to showcase your skills and achievements in a way that an email or letter could not. That said, you need a cover letter too because a cover letter is not technical and will allow you to establish a rapport with a hiring manager in a way that you could not with just a resume.

Ann Baehr is a CPRW and President of Best Resumes of New York. Notable credentials include her former role as Second Vice President of NRWA and contribution to 25+ resume and cover letter sample books.